The first question everyone should ask before floating a river is, “Can I accomplish this safely?” It’s a simple question with no simple answers. Do you have the necessary equipment for your goals and is it well maintained? Do you have the experience with your equipment and the surroundings in which you will be placing yourself? Will those accompanying you be assets to your safety or liabilities? These questions are only the starting point for creating a safe and memorable experience on the Lochsa River of Idaho. 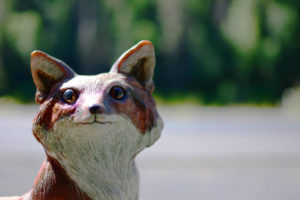 Todd is a fox made of clay. He could have been your neighbor’s garden fox. Todd won’t say. All he asked was to be delivered safely to his new home, The Lochsa Petting Zoo, located in a secret location above the high waterline on the Lochsa River. For this task he chose Steve Wassmuth (my dad), who carries over 35 years of professional whitewater guide experience on the Middle Fork of the Salmon River, Main Salmon River, Lower Salmon River, Snake River, Selway River, and others… but most importantly for Todd: The Lochsa River. My brother-in-law (Yuri), my sister (Brandi), and I were also recruited for the adventure.

The evening before our trip to The Lochsa was spent combing over a raft recently purchased by Brandi and Yuri. We put it on the trailer, checked (and double checked) for leaks, affixed a stern mount, checked oars, oarlocks, etc. This process didn’t merely check the boxes for safe preparation. We were also become familiar with the gear that we would be using to keep us all uninjured and smiling. With everything secured and accounted for, we waited for the sun to set and rise once more before delivering Todd to his new home. 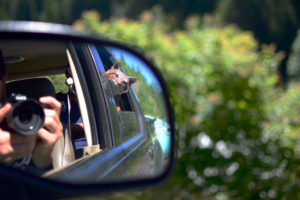 He’s just a dog after all.

The drive to The Lochsa the next morning was beautiful and calming as always. I kept a close eye out for Pat Sullivan (owner of Central Idaho River Shuttles) and his crack team of professional shuttle drivers, ready to wave my arms out the window in solidarity, but they were nowhere to be seen. We stopped on the bridge at Three Rivers Resort to check the water level, The water was 2½ feet up on the bridge. Steve noted that the river would be nearly unrecognizable compared to my last running of the river 2 weeks prior, when it had been running at 4 feet. This meant smaller waves, but many more exposed rocks and hazards to be avoided. This would be a much more technical challenge than I had expected. Todd remained stoic and unfazed…

Upon arriving at Fish Creek, where we would be putting in, we made one last gear check and carried the raft to the water’s edge. The growing roar of the river mirrored the ever-increasing pounding of my heart as the whitewater rafting trip became reality. The put-in was full of other rafting parties bustling about and speaking excitedly of what was in store for the day. Steve asked us who would like to run the stern mount and who should paddle. I suggested, “Since none of us (implying Yuri, Brandi, and myself) has ever run a stern mount, you should take it.”

A passing boater looked at our crew and said, “I’m going to pretend I didn’t hear that… and also, your joystick is installed backwards.” 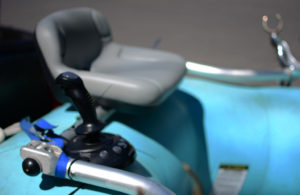 The newest tech in rafting.

Steve told us, since we were a single raft crew, we would be well served to find another group of boaters to paddle with. Safety in numbers is one of the best ways to mitigate risk on the river. Steve understands that, even with countless trips down The Lochsa at nearly every water level, the river is wild. The day you stop respecting the water will be the day you remember why you did. Steve approached a group of four boats from Missoula, MT and asked if we could tag along with them. The group leader replied, “Of course!” and began to explain to Steve how to signal if you are okay and in control in the water (several exaggerated taps to the top of the head). This is one of the first rules you learn rafting whitewater.

I almost laughed before realizing that I would do the same. Assuming that strangers you will be rafting with have zero experience is the best starting place possible. Steve listened patiently and I saw he was also learning the group leader’s temperament and attitudes toward whitewater safety. We were going to be each other’s lifeline of last resort today and needed to be on the same page. Todd nodded approvingly…

The first few miles of warm-up water passed quickly and our new group from Missoula congratulated us on how well we were doing. Never being ones to pass up compliments, we graciously accepted. Steve asked Yuri if he’d like to have a turn on the stern. Yuri jumped at the chance and guided us expertly through several rapids. Then came Morning Glory…

Steve explained the rapid, Morning Glory, would be fairly straightforward at this level with the exception of a rock slightly submerged on river left toward the bottom of the rapid. Water circulated violently beneath the rock. It was not a spot anyone would want to be. We ran the top of the rapid on a wave train and I soon realized we were heading toward the hole formed by the rock. Yuri shouted, “All Forward!” as a command to Brandi and me in the front of the raft. I looked to Brandi, who was looking at me. We didn’t paddle. We weren’t going to help the river take us over the hazard directly ahead. Steve pointed right, signaling Yuri to turn the boat, so that we could start paddling the boat away from the rock. Soon enough, we were launched into the hole.

I dove forward, throwing my body into the front tube of the raft, to give us forward momentum through the churning water beneath the rock. I was immediately sucked into the roiling river as most of the front section of the boat was being taken under the surface. The circulating water below the rock pulled me beneath the raft and I instinctively wrapped my left arm (my right arm was still holding my paddle) around the raft tube and found the rope that ran along the circumference of the raft. Pulling against the currents, my head broke the surface of the water. Brandi was already standing above me reaching for the shoulder straps of my PFD (personal flotation device). I quickly checked for more downstream hazards, handed her my paddle, and let her pull me back into the raft.

I attempted to assuage some my adrenaline with a heartfelt hoot and a holler. While I was being pulled under, Yuri had been launched into the air from his stern mount. The oar had swung forward hitting Steve in the back of his PFD, Yuri knocked helmets with him, and landed on top of him in the bottom of the raft. We christened this “The Lochsa Hat Trick” (oar slam, head bump, body-slam). Everyone was uninjured and laughing. The Missoula crew paddled up, checked that everyone was alright, and we persisted on. Todd had been very little help… 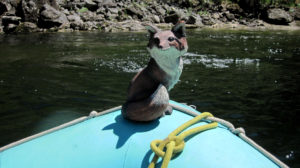 Steve resumed his duty at the stern soon after, when the most technical portions of the river presented themselves. We worked together and had tight lines through the rapids leading up to Lochsa Falls. I turned to Steve and asked, “Are you going to need me for The Falls?”

The roar of The Falls grew louder and I jumped into the river with an outstretched belly flop so that my legs and arms hit the water at the same time, allowing me to instantly start swimming aggressively, and putting a safe distance between myself and the raft. I could hardly hear the onlookers ashore cheering as I was swallowed up and released by Lochsa Falls. When I surfaced I looked downriver and the Missoula crew was paddling furiously upriver toward me. They didn’t realize I had purposefully exited the boat to swim. I gave several exaggerated taps to the top of my helmet until I was sure they had seen me. They discontinued their rescue efforts and I was again pulled into our raft. Todd was proud… 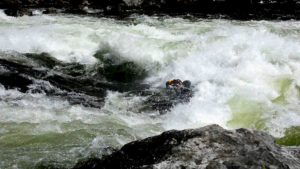 Just downriver we let Todd out to be with his friends in the Lochsa Petting Zoo. We said our goodbyes, reached the take-out, and returned to Grangeville, ID where our adventure had begun. Later that evening, while sitting around the campfire, Brandi and I recounted our day to my brother, Austin (another seasoned guide of Idaho’s rivers). We talked river safety and the importance of always knowing what you’re getting into. Austin had been putting in at the ramp preparing for a commercial trip down the Snake River in Hells Canyon last year when a man approached him and asked, “Hey man, I’m about to put in for a solo trip. This isn’t, like, a whitewater river is it?”

Austin laughed, thinking the man was joking, and returned to rigging his raft. When the man didn’t leave, Austin realized he wasn’t kidding and told him, “This is definitely a ‘whitewater river’, and you can easily get yourself in a bunch of trouble. You need to go to the information board, read everything, and seriously reconsider what you are about to do.”

This anecdote was the antithesis to our trip delivering Todd to his friends earlier that day. This man had no knowledge of the river he was embarking on, he had no one with him to help him out, and I’m going to go ahead and assume he didn’t have the proper gear, or knowledge, to ensure his safety in a troubling situation.

Don’t be like this man: entering Hells with the assumption it’s heaven. Be like Todd… Even if you think you’re above the high water mark, it’s always good to have some friends around to watch your back.

"As one of the drivers for Central Idaho River Shuttles, we take great pride in transporting our customers' vehicles from one location to another. We deliver the vehicle in the same condition we recieved it, so our costumers can enjoy their vacations on the Salmon and Snake Rivers of Idaho without … END_OF_DOCUMENT_TOKEN_TO_BE_REPLACED 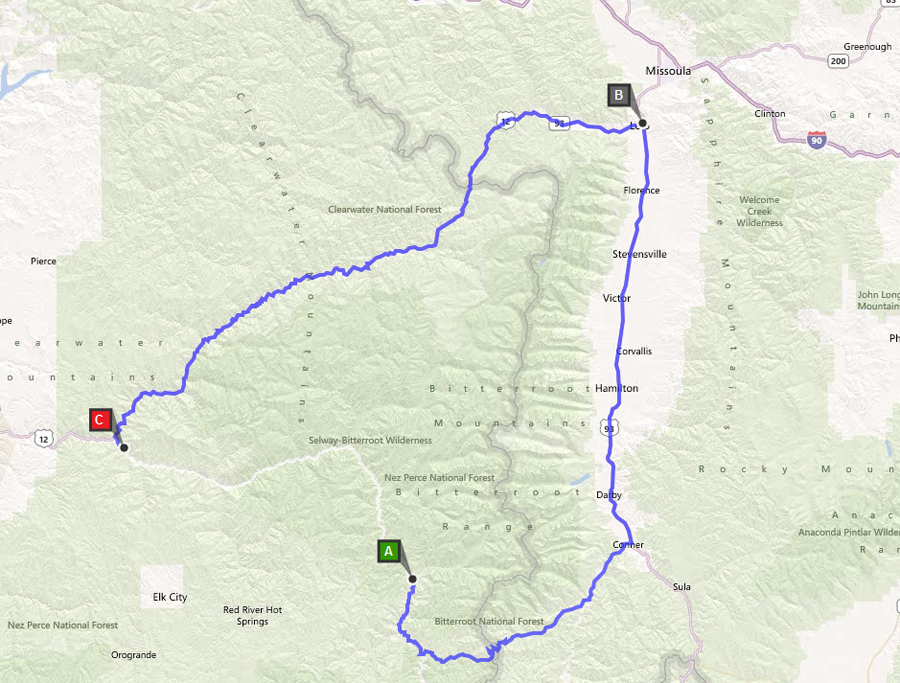